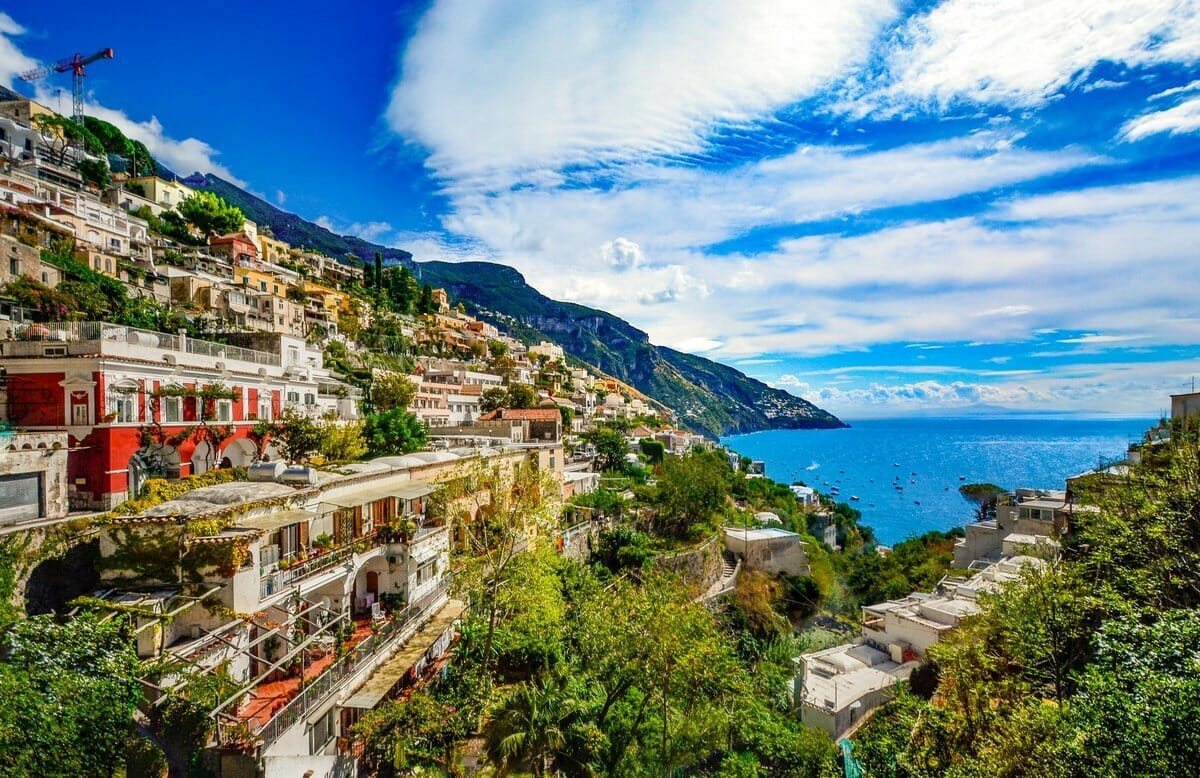 It’s a true challenge to the senses to take in all of the beauty of the Riviera. (Yes, it really was this gorgeous!) We recently got back from a wonderful cruise along the Italian, French, and Spanish Riviera for our 30th anniversary. Today, I’m sharing a Riviera travel guide with you and letting you in on the must-see sights in several of the villages that dot the coastline of this breathtaking area.

From the Tuscan port city of Livorno, you can reach Florence (2 hours), Pisa (1 hour), Cinque Terre (1.5 hours) and Lucca (45 minutes), making it a great base camp for several days of sightseeing. Florence is the capital of Italy’s Tuscany region, and it’s famed for its Renaissance architecture and art – most notably the Duomo, the terracotta-tiled dome of the city’s Cattedrale di Santa Maria del Fiore. Cinque Terre is a series of five picturesque seaside fishing villages along the rugged coastline. It is a National Park protected by UNESCO.  Pisa is known for its iconic leaning tower. (Fun fact: it was begun in 1173 by Bonanno Pisano and wasn’t finished for nearly 200 years. It began to tilt as soon the third level was completed!) Lucca is an old-world medieval town with well-preserved Renaissance walls which encircle a historic city center and cobblestone streets. It was our favorite place in Tuscany! We found it utterly charming and loved that it was less-touristy than the other cities in the region.

At one time, pastel-colored Portofino was a simple fishing village, but now it’s known for its seafood restaurants, high-end boutiques and the must-see-to-be-believed yachts that line its harbor. (One of them had a helipad on top!) It was a glamorous and fun place! Easily accessible from Portofino are both Genoa, known for the historic Via Garibaldi, a street lined with elegant homes and Santa Margherita, a seaside village where life revolves around the waterfront and its two seaside squares. With its seafood, shopping, and charm, I decided Portofino had it all, and I told Bob I was thoroughly ready to move there. 🙂

The Amalfi Coast is an awe-inspiring stretch of coastline that runs along Italy’s southern edge. It is stunning, naturally diverse, and emotionally moving. Photos do not do it justice! Like so many of the towns we visited along the Riviera, Amalfi is built around a cathedral. St. Andrew Cathedral, built in the early 1200s, is dramatically located atop a flight of 62 stairs and houses the relics of the Apostle St. Andrew. The city is known for its lemons, which are the size of grapefruits! (I am not kidding you.) We loved the colorful shops, darling cafes and winding avenues. I wish we’d had time to visit the Emerald Grotto, a seaside cavern near Amalfi that is filled with stalagmites, stalactites and gorgeous green water. Ravello, situated high in the hills above Amalfi, is known for its blooming gardens and luxury hotels. We didn’t get a chance to visit, but I’ve heard that it’s less touristy than some of the other cities on the Amalfi Coast. Positano (pictured at the top of this post) was a humble fishing village until the 1950s when writers like John Steinbeck descended on the now-popular vacation-destination. It is known for its colorful linen clothing and custom-made sandals – you pick the design and material, and they will fit the sandal to your foot!

Home of the Monaco Grand Prix, Monaco is a luxe destination in the Cote D’Azur (as the French Riviera is known), is famous as a playground for the rich. With its Grand Casino, Palace, and racetrack (which is basically the city streets), this independent city-state was easily doable in a day. Don’t miss the Grimaldi family palace, with its Changing of the Guard ceremony, which takes place daily at precisely 11:55 a.m. We loved seeing the beautiful Cathedral of the Immaculate Conception, where Prince Rainier III and Princess Grace Kelly married, and which now contains their tombs. The nearby cities of Nice (capital of the French Riviera) and Cannes (known for its world-renowned film festival) are easily accessible by car from Monte Carlo, with the three roughly forming a triangle. (We didn’t visit either of them on this trip. Next time!)

This Provencal seaside resort town has a reputation for attracting jet-setters and being the place for, um, lively nightlife. We took a walking tour of the old town and loved its picturesque atmosphere and charming squares. Saint-Tropez is home to elegant boutiques, stunning scenic views, and delicious local lobster. Don’t leave without trying the lavender gelato!

Marseille was founded by the Greeks around 600 B.C., and it is known as the gateway to the Provence region of France. The Romanesque-Byzantine landmark church, Notre Dame de la Garde Basilica, anchors the city. There’s some great history in Marseilles, but I’ll be honest – it’s not very pretty! We headed out through the countryside over to Aix-En-Provence, the birthplace of Post-Impressionist painter Paul Cézanne. We visited Atelier Cézanne, his studio, and marveled at the fantastic natural light streaming in from the enormous windows. Then we headed over to Cours Mirabeau, the main boulevard (lined with elegant homes, shops, and darling cafes) for some lunch and to browse the market. This was a great place to buy gifts, and we purchased some locally-made soaps. Provence is famous for its fragrant lavender fields, which bloom from June through August in the region. We didn’t have time to visit them – or nearby Avignon on this trip – but both are on our list for next time!

Barcelona is a bustling, cosmopolitan city. There is a lot to see in Barcelona, and with only one day, we opted for a super fun city overview with a guided Barcelona Segway Tour. I highly recommend this! A must-see in the city is Gaudi’s still-unfinished masterpiece, La Sagrada Familia. Begun in 1884, this unusual church is slowly being completed through donations. Also, a don’t-miss is La Rambla, the bustling (and very touristy) main promenade.

Ibiza is known as the party capital of Europe. (Think Las Vegas, on steroids.) It’s actually an island off Spain’s east coast. Bob and I went around calling it “Eee-bee-za” in our Texas twangs, but were quickly corrected by our George Clooney-lookalike guide, who pronounced it “Eivissa.” (This was not as adorable as it sounds. We totally looked like touristy hicks.) Party reputation aside, Ibiza is a beautiful spot, with whitewashed buildings, a beachy, rugged coastline, and hills covered with olive and fig trees. Its Old Town is one of the best-preserved medieval towns in Europe and features winding paths and cobblestone streets. The view from Old Town is breathtaking!

Have you been to the Riviera? If so, what were your favorite places? We loved it, and cannot wait to go back! Please leave me a comment and help me with your tips on where to go and what to do! I would so appreciate it! 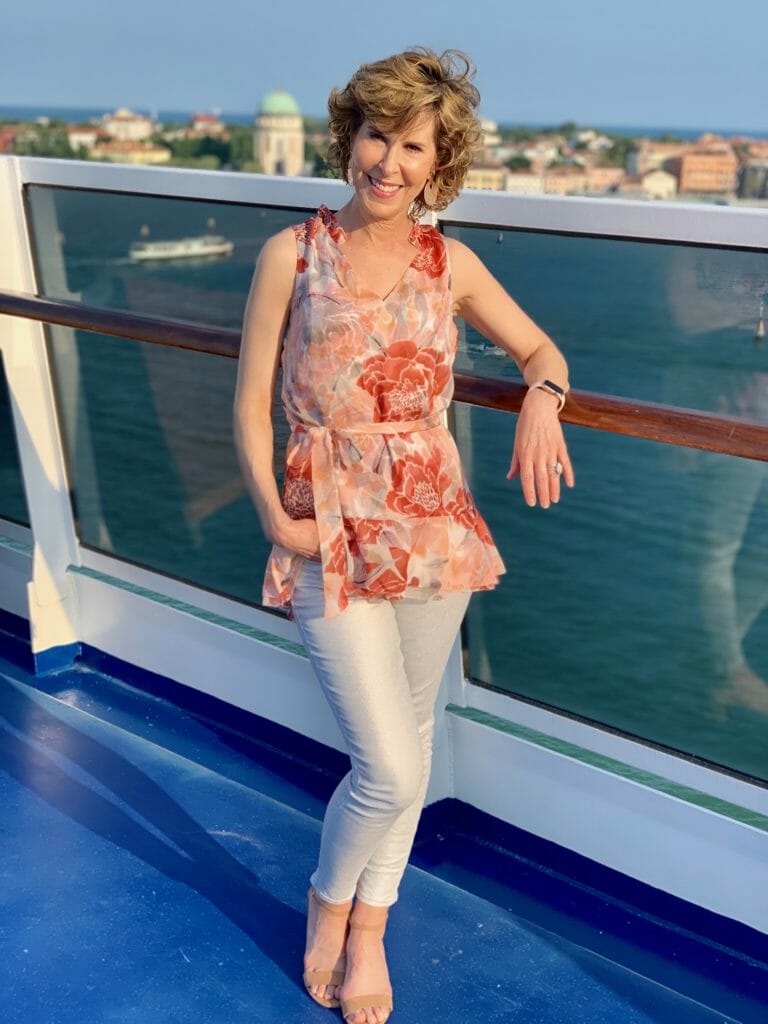 Have you ever wanted to cruise the Greek Isles? We’re just home from doing it, and I’m giving you all the details on how we planned it + I’ve got some SECRET insider Norstrom Anniversary Sale scoop for ya! (You’re gonna be IN THE KNOW on this sale!) 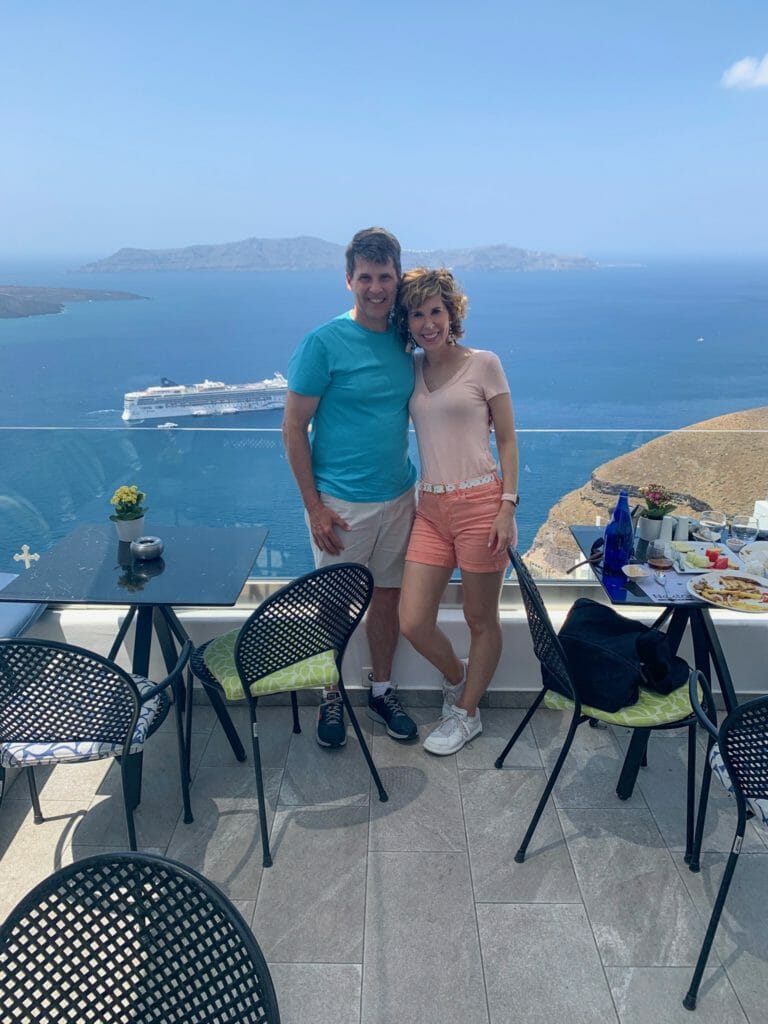 From Venice through Ancient Olympia (with lots in between), I’m giving you the scoop on where we went, what we did, and what I wore on the first half of our Greek cruise. 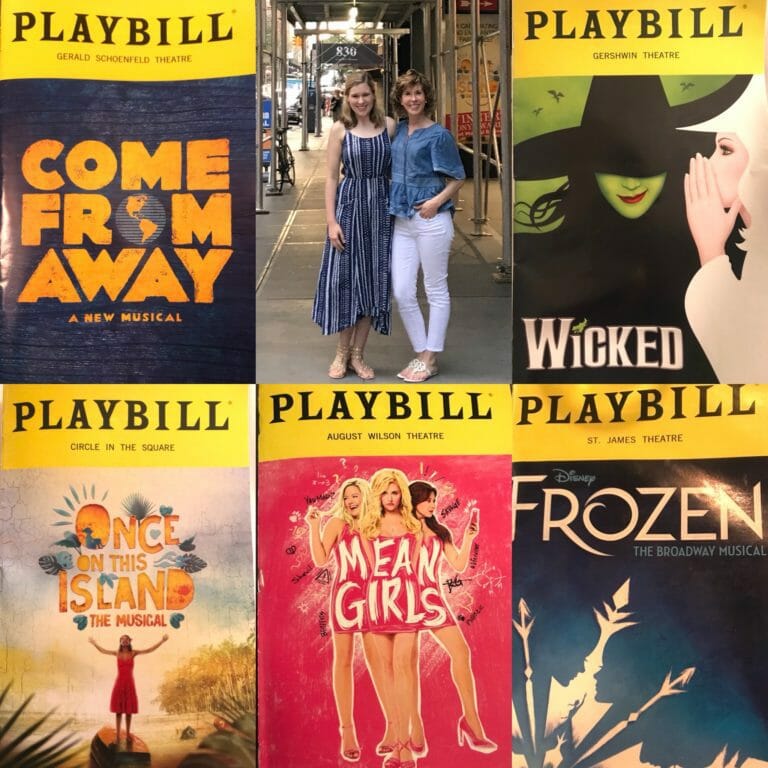 I just got back from a whirlwind mother-daughter trip to New York City with my 21-year-old daughter! We had some great talks, laughed a lot, and even cried a little. (Details in this post.) We also ate fantastic food, walked and walked, and saw some incredible Broadway shows (five, to be exact!). Today I’m sharing all the… 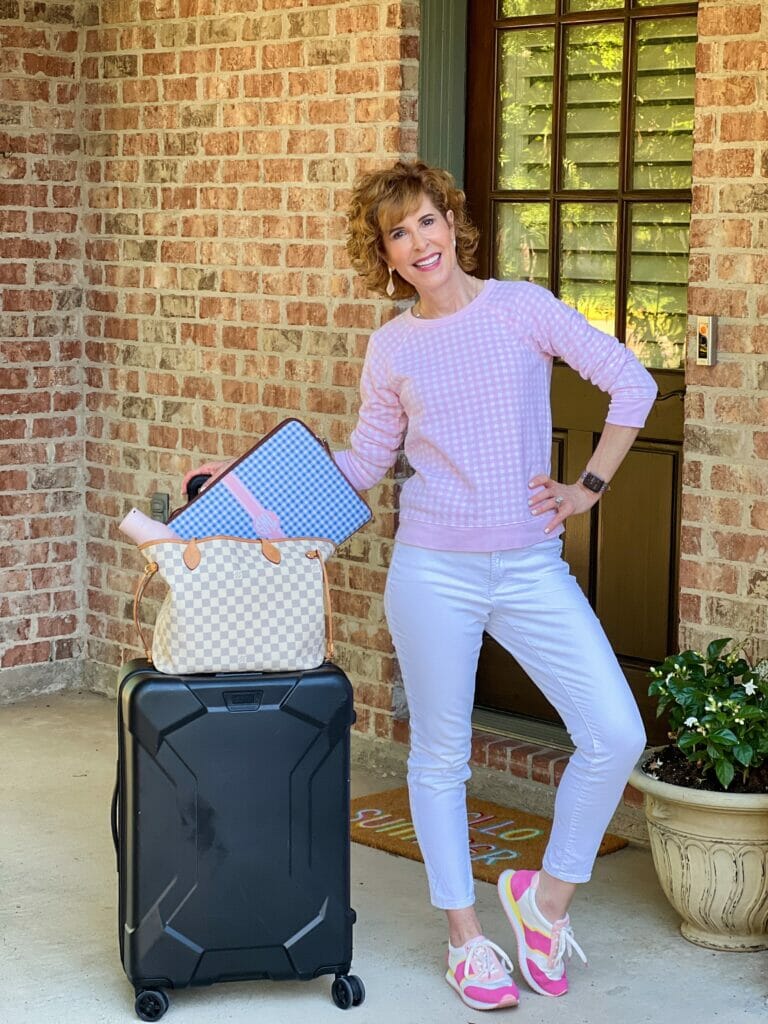 It’s no secret that empty nesters love to travel! But what’s the best luggage for all those travels? I’m helping you figure it out! 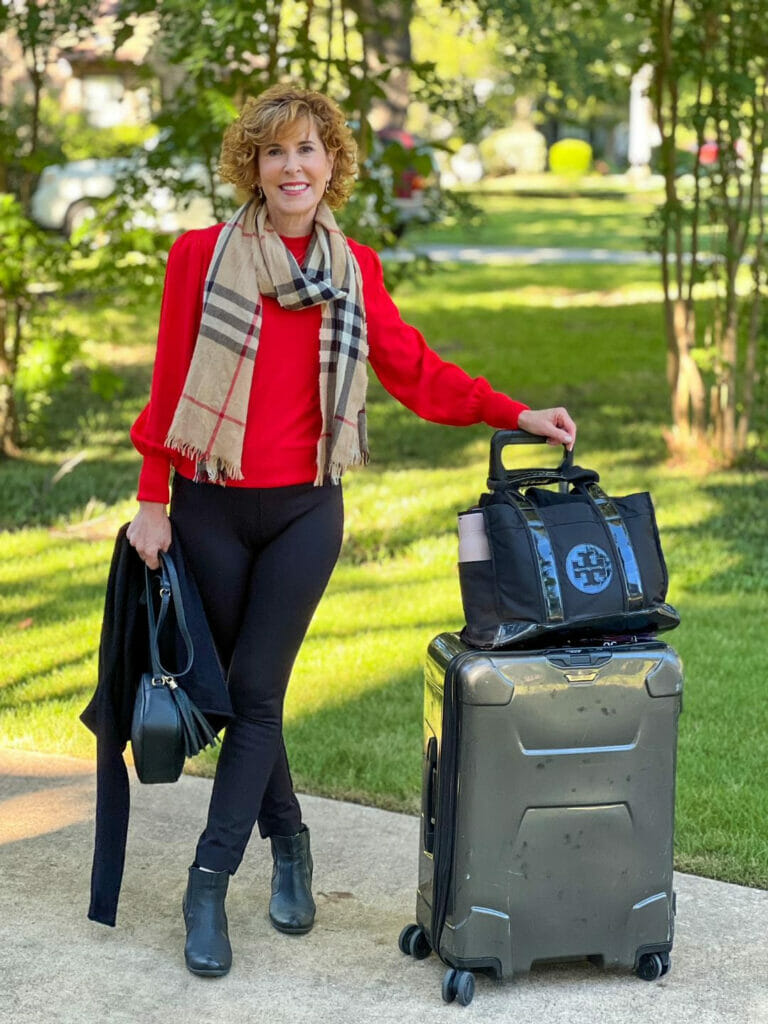 When you only have 48 hours in NYC, you’d better know where you want to stay, eat, play & what to pack! I’m taking you BTS of our whirlwind mother/daughter trip. 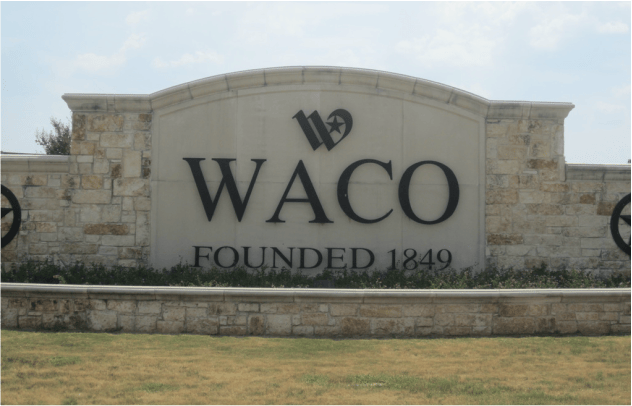 With the success of HGTV’s Fixer Upper, starring Chip and Joanna Gaines, the little old college town of Waco, Texas has hit the national stage. Only an hour and a half outside of Dallas, this delightful spot makes a great weekend getaway destination for empty nesters, parents on a no-kids weekend, or even families. Waco…

Encouragement, inspiration, and blessings sent straight to your inbox!

and I don’t want you to miss a thing!

and I don’t want you to miss a thing!